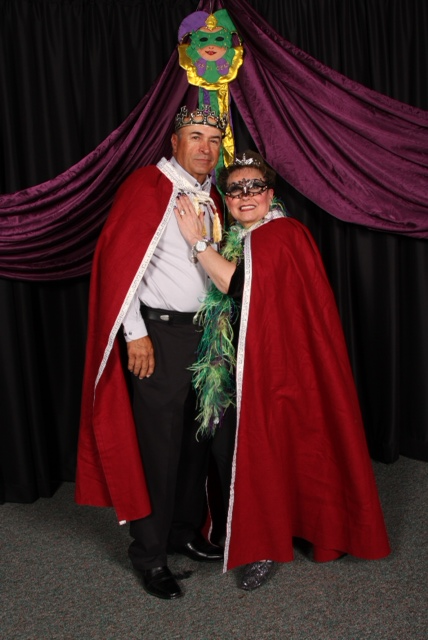 What race you ask. The King and Queen election race of course. I was just given today monetary votes for one of our nominated couples.

Let me explain how this works.  Every year we have a couple crowned as King and Queen of Mardi Gras.  You can nominate friends, family members or yourself by writing the nominees’ names on a nomination envelope and filling it with dollars (votes).

Yes, our election works just like a real one.  The candidates with the most money win.

You can see by our graph down below that Marianne and Richard have already hit the ground running.  They’re not going to waste any time waiting for Saturday night to campaign for votes.  Winning King and Queen of the twentieth is kind of a big deal.

I know what your going to say. “They’re so far ahead there’s no way to catch them.”  Now that’s not true.  They just happen to have a little bit of a head start.  If you want to beat them your just going to have to work a bit harder on Saturday night.

Remember, every dollar you send in equals one vote.  So vote often, because it all goes to benefit the kids of All Saints Catholic School.

After a very close election race this past Saturday a final winning couple was announced.  Adam and Cassi Rincon were crowned the new King and Queen of this year’s Mardi Gras Dinner and Dance.  Our new royals were elected through the very determined efforts of their family and friends.

Although the new young royals were very honored to be awarded the thrown, they were even more amazed that they had somehow won against the very loved Deacon Howard and Liz Herring. The election was something of a shock because the Herrings were the favorite win.  You can see just how close the election was.

It is possible that Adam’s rugged good looks, honorable demeanor and obvious distinction put them over the top.

You can read more about how our election is run on our King and Queen Election page.

The All Saints Mardi Gras has come to an end and even though it was a huge amount of work it was still a great time.  Many people and companies invested a great deal of time and energy in the months working up to the event and it showed.  Everyone enjoyed the wonderful food from Cattlemen’s Steak House and amazing music provided by Louis Najar.  As every event of this kind does, we had a few hiccups but nothing that couldn’t be remedied quickly and that just gives us a little more knowledge for next year.

Door prizes were given away, auction items were bid on and competed over, we ate King Cake, danced and after a tense election we even had a King and Queen crowned. Some would say that is enough but in the end this is a fundraiser and we were partying for the school (life is hard). After all the balloons were popped and the bills were paid, the All Saints Mardi Gras dinner and dance did pretty good. We can’t give out too many specifics but our King and Queen election generated over $630 and our silent auction produced over $4,000.  These two items combined with the sale of King Cake, masks, beads, boas and photos amounted to the best Mardi Gras fundraiser we have had to date.

Below is a photo of this year’s new King and Queen.  The election was started weeks before the Mardi Gras dance and finished that night.  After an intense election and a number of votes from the party guests the new royals were chosen.  Tommy and Candice Rincon were voted into their very auspicious position by some very generous people.  Their new royal standing has earned them a number gift certificates from around Roswell and two free passes into next years Mardi Gras.

A big thanks to the photographer of our Mardi Gras. The photo of our King and Queen was taken by a local photograph Jeff Neria and his team who have helped with the Mardi Gras dance for the last few years. Thank you so much Jeff.

With that we hope to see you at next years Mardi Gras Dinner and Dance.

We are into the last few weeks before the King and Queen Election final results and the votes are starting to add up. The winners will be announced at the Mardi Gras Dinner and Dance on the 18th so you still have plenty of time to vote for your favorite couples. Remember if you don’t see someone on the chart you think should be in the running you can still vote for them.  Take a donation to the All Saints Catholic School office and vote, every dollar donated equals one vote. You don’t have to vote for someone you see in the chart you can vote for anyone, even yourself.

The winners will receive a number of prizes from local buisnesses as well as free entry into next years Mardi Gras Dinner and Dance.

This is a fund-raiser so you can vote as many times as you like and for as many people as you wish.

If you have a donation you would like to vote with but don’t have the time to get to the school you can e-mail us and we can coordinate a pick-up.